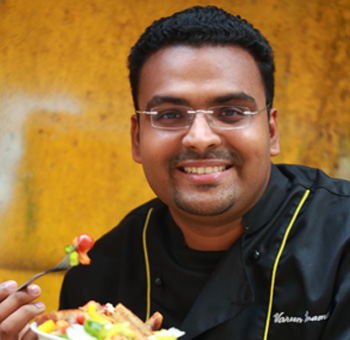 Founding partner and chef at ‘The Chocolate Factory Ecuador’- India’s premier chocolate brand endorsed by the Government of Ecuador. I have served many dignitaries and personalities like the royal family of Al Sabah, Al Khalifa and Al Saud in the Arabian Gulf to Barack Obama, Nicholas Sarkozy and Vladimir Putin to name a few.

Mainline and Media Visibility: My work has been featured in several International media houses like Sarab magazine(Kuwait), Ginja food(South Africa) and Indian houses like CasaViva, L’Officiel, BBC GoodHomes, HiLiving, Uppercrust, MidDay to name a few.Also, featured on Bloomberg Television promoting festive specials.Recently, featured on NDTV 24X7 on Will travel for food with AneeshaBaig ’Desserts with a twist’ and BBC GoodFood as the only chef in India to promote ‘Cocoa Cuisine’.

Food Styling for Cookbooks: ‘Creative director’ for Michelin-starred Chef Vikas Khanna’s Vegetarian saga ‘Hymns from the Soil’. Food Stylist for Master Chef India cook book by Bloomsbury publication. Just wrapped working as food designer and stylist for UTSAV and another prestigious International cook book by Bloomsbusy USA, to be launched in March 2016. Working on another to be launched in November 2016.

Workshops: Only chef in India, who propagates chocolate as a luxury lifestyle ingredient in desserts and savorycuisines, pairing and appreciation trails for corporates and individuals.

Brand Ambassador: Ecuadorian cocoa in India by the Govt. of Ecuador.