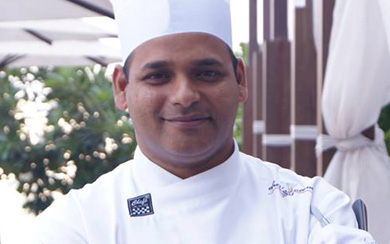 Chef Paul Kinny is the Group Director of Culinary Services at the Phoenix Mills Pvt. Ltd, Mumbai. He has also been instrumental in spear heading the opening of The Sahib Room and Kipling Bar, Yukka by Chef Ting Yen at the erstwhile Palladium Hotel which is now handed over to the St. Regis. He now over sees the concepts and operations of their restaurants at Phoenix Market City Kurla and Pune.

Previously, Executive Chef at InterContinental Marine Drive, Chef Kinny was a vital member of the F&B team responsible for setting-up the hotel.

He has close to two decades of experience in Management, as well as Food & Beverage expertise in Hotels and Restaurants, his main strength being his ability to think innovatively. His exceptional service record spans across establishments such as the Taj Group of Hotels, Gourmet Restaurants Private Limited and Impresario Entertainment and Hospitality Pvt Ltd.

Chef Paul earned a Diploma in Hotel Administration and Food Technology from Sophia’s Polytechnic, Mumbai in 1992 and started a decade long career with the Taj Mahal Hotel, Mumbai where he worked at their premier fine dine restaurant, the Zodiac Grill. Thereafter, he joined the country’s first celebrity restaurant, Tendulkar’s, as its Executive Chef. After a successful term in India, he moved to Dubai as the Executive Chef of the Modern Indian Fine Dine Restaurant at the Souk of Madinat Jumeirah.

Chef Paul returned back to India in 2005 and decided to do something other than being a chef and put his expertise to managerial use. He joined Impresario Entertainment and Hospitality Pvt Ltd (IEHPL) as the Business Head of their fine dine division. Here he opened a total of seven restaurants across 3 cities, which included the Salt Water and Smoke House Deli brands.

In July 2009, Chef Paul took over as the Executive Chef of InterContinental Marine Drive, helming their signature restaurants ‘Kebab Korner’, ‘Corleone’ and ‘Dome’. He was part of the core team that developed ‘KOH’ and ‘Long and Short’.

Chef Paul’s menus speak his language- they showcase seasonal produce, premium fresh ingredients, and simple uncomplicated flavors; are high on visual appeal and sublime textures; and come together to evoke a crescendo of delight.