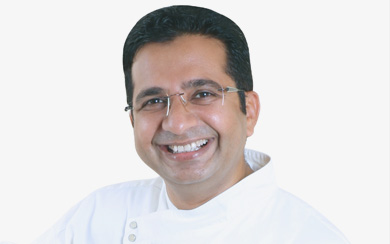 Brought up in Orissa, Anees Khan graduated from IHM Chennai in 1997. He went on to join the The Leela Kempenski in Mumbai. A year in the hot kitchen later, he found himself in the patisserie kitchen of the hotel. Training and work experience under expatriate pastry chefs, who showed exquisite and fine pastry skills, spurred an interest to make a career in patisserie. Anees has trained under the Swiss Master Pastry Chef Beat Loffel, who is credited to have changed the patisserie kitchen in India. Soon after he became the Head the Pastry kitchen of The Leela, Goa, where he managed the millennium festivities and masteredfusion and Asian desserts.

A year later, chef Anees joined Fairmont Chateau Lake Louise, Alberta, Canada, as their Chef De Partie and brushed shoulders with some of the best talents in Canada.

Anees returned to India in 2001 andjoined hands with celebrity chef Moshe Shek in Mumbai to set up his bakery kitchen, and design desserts for his various delis, cafes and restaurants.

When in 2004, he felt the need to get back into the mainstream, he joined Hyatt Regency, Mumbai, as a Sous Chef, Pastry. Chef Anees also competed in and won two medals at the first Indian Culinary Competition held in the country, representing Hyatt hotels.

He then moved to Goa, to join The Leela again, as their Pastry Chef. During his tenure here, he served among many other high profile guests, then US president Bill Clinton and his entourage.

His next move was to Egypt, as the Executive Pastry Chef at JW Marriott in Cairo. Here he also mastered the craft involved in Arabic desserts and learned the bedrocks of Middle Eastern Cuisine.

In 2007, he was invited as the Pastry Chef for Kilimanjaro Hotel Kempinski, Dar Es Salaam, to revamp their patisserie and impart training. He alsoserved the likes of President George Bush and International cricketers. During his stint here, he received recognition as the best pastry chef in the region.

His next stop on the world map was Oman, where he joined Six Senses Resort & Spa, as their Executive Pastry Chef. The stint brought along immense exposure has he worked with chefs of 35 nationalities. Among the famous patrons of his creations here were Rowan Atkinson, Robin Williams, and cricketers like Adrews Strauss.

In 2010, he returned to Mumbai to pursue his dream of setting up premium catering company. He set up Star Anise Fine Foods & Leisure Pvt. Ltd. (SAFFL), bringing to it his 15 years of culinary experience working for several International five star hotels across the world.

The company is now all set to open StarAnise, a patisserie, viennoiserie and boulangerie, which will offer and serve a repertoire of French desserts, jams and bakery items with its own unique twists.

StarAnise Patisserie will serve classic French pastries introduced in the 17th and 18th centuries along with the region’s contemporary desserts.

Also all-day viennoiserie and boulangerie, it offers artisanal Italian and French breads, homemade jams and dips, organic wild honey, and a savoury menu that has flavours from North Africa, Sri Lanka and Egypt